Crispin Scales and the Golden Pearl is the first instalment in an exhilarating fantasy series for 8 to 12 year olds. With a twist that will drop your jaw to the floor, and charming supernatural characters both boys and girls can imagine as their best friends, Crispin Scales is the children’s series we’ve all been craving.

The Crispin Scales Series are stories about friendship and magic. Set in the fantastical land of The Realm, we follow the adventures of Crispin Scales, a clumsy, naïve dragon, prone to self-pity.

He finds out that things don’t always turn out how you think when he learns it is his destiny to save the world, but is murdered in a bloody battle before even trying. But destiny doesn’t let you off that easily, as he soon discovers when an ancient spell brings him back – in a very surprising way.

Crispin learns that he can change what seems like a bad situation into a positive one by changing his attitude first. More importantly he learns that while being all-powerful might be nice – friendship and family are more important.

» Find out more about Book 1 – Crispin Scales and the Golden Pearl. 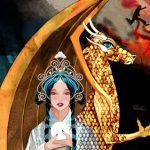